Well, it was touch and go up until 18 hours before as to whether the Oxonian (Oxfordshire Road Race League) Road Race would go ahead. There had been Thames Water works, and resurfacing from midweek, and the traffic lights were only removed Saturday lunchtime from the A329 between Milton Common and Little Milton. A huge thanks to David Jones who made at least two trips out to the circuit to check this, putting in a total approaching 24 hours of work in the days leading up to the event, helping with both putting out and collecting the many signs necessary, the transportation of the equipment necessary for the safe running of the event, and driving the race Chief Commissaire.

Sunday dawned wet and windy with 46 riders taking the start and 29 finishing the 3.8 laps of the Great Milton circuit totalling some 56 miles. It was something of a clean sweep for High Wycombe CC taking 1st Sebastian Gary,2nd David Roper, and 5th Rob McGlue, as well as David Roper taking the second lap sprint. Tony Turner of Mickey Cranks was the highest placed of local riders with 8th place. No Oxonian CC riders took part.

Our thanks are due to the Wychwood Brewery for supplying additional prizes with packs of Hobgoblin beer and Jerseys.

With ever more stringent conditions being imposed by the various authorities (police and highways) it takes significant planning and logistical effort to put on such events even at this local level which would not have been possible without all the above. Thanks also to British Cycling who supplied Accredited Marshalls and three National Escort Group motorcycles. 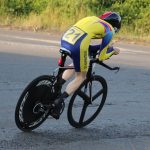 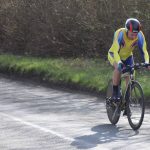