A week on and the dust has settled. But what an evening! We were amused and amazed by Steve Rowe performing his magic at the various tables as we dined. Simon Brotherton gave the 80 Oxonians and friends a remarkable behind the scenes look at broadcasting from the Rio Olympics and the African Cup, before a brief history of the club and proposing a toast to the club.

Simon went on to present the trophies, and stayed on to chat with members and guests long after the completion of formal proceedings. The raffle provided some lucky members with quality prizes to take home including club jerseys signed by Chris Boardman and Victoria pendleton, cycling accessories and vouchers provided by the trade.

Martin Howard was made an Honorary Life member in recognition of his eight years as Chairman. A special award in the form of a cyclist sculpture was presented to Dennis Quantrill for twenty five years’ service on the club committee, as custodian of  our  trophies, and timekeeping over the years. Both these awards were presented by club President Mick Bowen.

Events like this take considerable planning and commitment from various individuals to make it happen. We acknowledge the efforts of Malcolm and Dawn Rose, Dennis Quantrill, Steve Legge, Calum Murray and Harriet English in ensuring the event was a success. Our thanks are also due to Bikezone, BeeLine Bikes and Mickey Cranks for their generous donation of raffle prizes, and the Managing Agencies of Chris Boardman and Victoria Pendleton for the signed jerseys. Thanks also to Steve Legge and Phil Fowler for their photographs which you can view on our Facebook page.

Here’s to the Centenary! 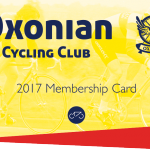